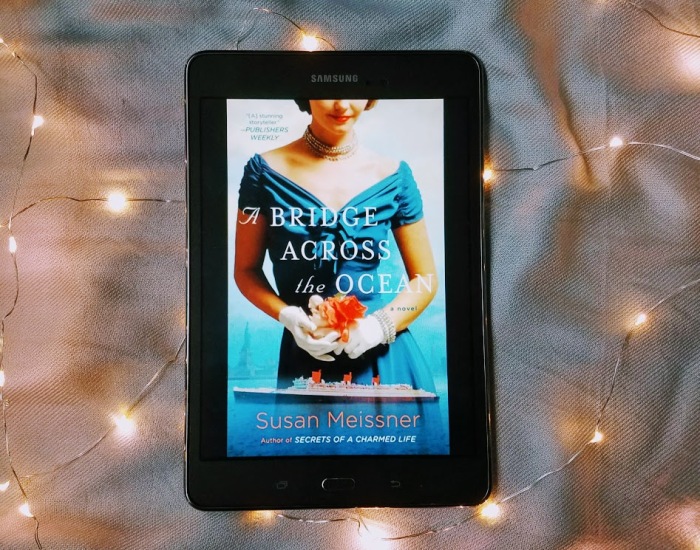 A Bridge Across the Ocean by Susan Meissner

There are three narratives in play in this book. The first is Brette Caslake, a woman living in modern-day San Diego. Brette can see and talk with ghosts, though she has been trying to supress this aspect of herself since she was a little girl. The second is Simone Deveraux, a French Resistance fighter. The third is Annaliese Lange,a former ballerina fleeing from her Nazi husband.

Simone and Annaliese are thrown together on the RMS Queen Mary as it steams across the Atlantic in 1946 to reunite European war brides with their American husbands. But the secrets both women must keep simmer under the surface, and only one woman will get off the ship in New York. Meanwhile in the present day, Brette is investigating the Queen Mary as a favor to an old friend. She encounters a spirit on the ship which points her towards the half-century-old mystery . . .

I’m of two minds regarding this book. The stories of Simone and Annaliese are very well done. Each woman is given a unique voice, and their histories are compelling; the mystery surrounding their fatal voyage is engaging. You wind up caring deeply about the fate of both these women.

In contrast, Brette’s modern day storyline feels flat and tacked on. Her story feels like it exists solely as a tool to push the 1940s narrative along, and even then it feels unnecessary; Simone and Annaliese’s story could have been told entirely without the present-day narrative. The idea of a woman who can speak with ghosts is intriguing, but the end result here is unsatisfying. Brette allows herself to be bullied into investigating the haunted ship, all the while dealing with a husband who may or may not think she’s insane, but is trying to push her into having children anyway. Brette’s fears about motherhood, and passing on her unwanted ability onto her children are summarily brushed aside by her husband, and his acceptance (or lack thereof) of her abilities are never really resolved. I found the entire thing to be aggravating, and I found myself flipping past the chapters which featured Brette in favor of finding out what happened to the women in 1946.

In all, this is not a bad book, but I can’t help feel that the modern day narrative detracts from the overall story. Still, the book is worth checking out for Simone and Annaliese’s stories, and other readers may not find Brette’s storyline so off-putting.

An advance ebook was provided by the publisher via NetGalley in exchange for an honest review. A Bridge Across the Ocean will be available for purchase on March 7th, 2017.