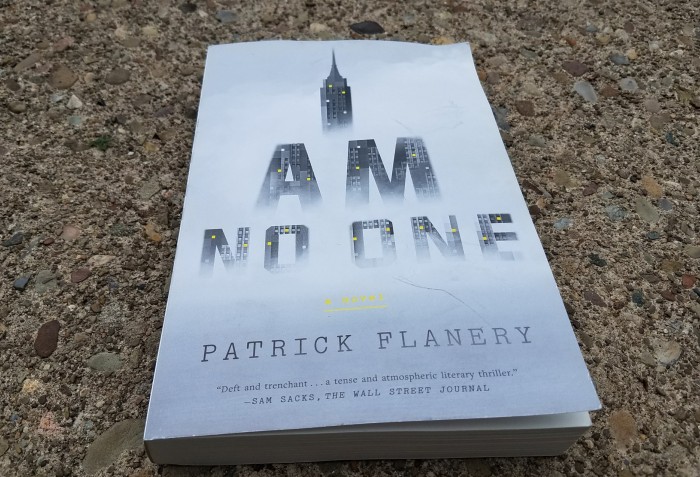 I Am No One by Patrick Flannery

Jeremy O’Keefe is your average, everyday NYU history professor. Nothing special or remarkable to make him stick out from a crowd, except perhaps for a decade spent teaching overseas at Oxford University. Then, one day, he goes to a cafe to meet one of his graduate students and is stood up. Returning to his office, he finds he emailed said student earlier that day, asking for a postponement . . . but he has no memory of sending that email. Strange events continue to build: people who seem to be following him, or waiting outside his home and his office–staring in through the windows. The events culminate when he is sent a plain brown box, a box that contains a computer printout of every website he has ever visited in the past decade. The line between paranoia and true persecution continues to blur as Jeremy finds himself at the center of an incredibly large and complex, yet faceless surveillance. What could he possibly have done to make himself such a target?

Flannery has a very flowing, lyrical writing style. The book, written in the first person, flows and skips along in the vein of a free association memoir. Jeremy O’Keefe, who’s focus of study is surveillance within totalitarian states, is a man who seems to harbor more than the usual amount of baseline paranoia. As the events in the book continue to pile up upon his consciousness, that natural high functioning paranoia begins to change into something darker. Self doubt begins with worries of dementia, of fugue states, then transfers to the possibility of serious mental disorder, then finally to certainty, and the corresponding uncertainty of who to trust.

The beginning of the book was incredibly interesting. Flannery does a great job in his creation of Jeremy O’Keefe; the character is complex, multidimensional, and very relatable. The uncertainty whether Jeremy’s paranoia is justified and to what extent, combined with the slow unraveling of the events of his life over the past decade, form an intriguing little mystery as the reliability of our narrator is called into question. Unfortunately, the tension that underscores the first part of the book is not maintained, leaving the ending flat, anticlimactic, and unsatisfying. As the final parts of the book see the puzzle pieces fall into place, the revelation of the truth should be disturbing and electrifying. Unfortunately, the knowledge of the truth pales in comparison to the anxiety of not knowing, and the reader can’t help but feel a bit let down and cheated by how something potentially earth-shattering can feel so banal.

Those who are heavily into psychological thrillers may still want to check out this book for the interesting beginning and the fine characterization of the protagonist. But I feel that most readers will be left frustrated by the lackluster ending.

One thought on “Book Review: I Am No One by Patrick Flannery”