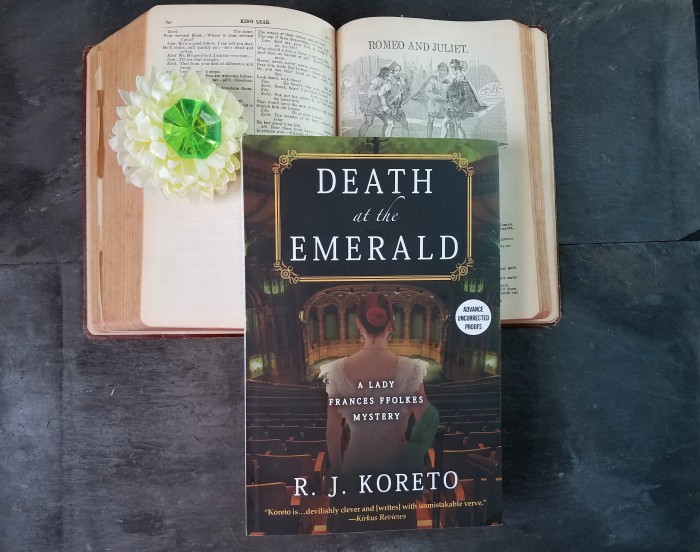 Death at the Emerald by R.J. Koreto

This is the third book in the Lady Frances Ffolkes series. Expect spoilers for the first two books in the review below!

Lady Frances is still turning heads. Having returned to London after the events of the last book, she seeks a way to turn her experience solving mysteries into something of a detective role. Gossip having arrived before she did, Lady Frances soon finds herself helping an elderly dowager find her daughter, missing for over thirty years. Taking to the case with enthusiasm, Lady Frances and her loyal maid, June Mallow dive into the world of theatre, moving pictures, secret pacts, and mysterious stalkers. Determined to prove that she is capable of becoming a real-life “Lady Sherlock,” Lady Frances refuses to give up the hunt, even as her own safety is threatened.

I love this series. R.J. Koreto, who also writes the Alice and the Assassin series, does a great female lead. Lady Frances is forward and clever, but her intellect is human, and does not ascend the remote and reptilian heights employed by a Sherlock Holmes. Lady Frances makes mistakes, and overlooks clues, but her tenacity and quick mind generally lead her aright. As a result, the character is very relatable. Rather than feeling like the protagonist is so far beyond you as to be a separate species all together, Lady Frances is like the clever friend you always like spending time with.

June Mallow is also a lovely character. Where Lady Frances holds her strength in her boldness and willingness to write her own rulebook, Mallow finds her strength in quiet determination and an unflagging loyalty to those she loves. The relationship between both characters is the best kind of friendship, where each character’s strengths are offset by the other’s weaknesses, and vice versa. The two women may exasperate one another on occasion, but by and large they function much better together.

Fans of female-fronted mystery series will love this book. Fans of Victoria Thompson and Deanna Raybourn should definitely add this book to their TBR lists!

An advance copy of this book was provided by the author in exchange for an honest review.