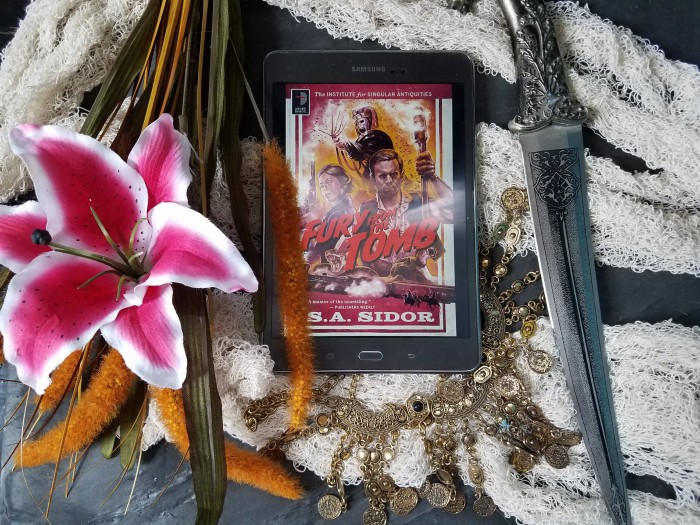 Fury from the Tomb by SA Sidor

In 1888, young Egyptologist Romulous Hardy is offered a vast sum of money by a reclusive millionaire to search for ancient tombs in Egypt. Hardy jumps at the chance to get out of the library and into the field, but soon finds himself dealing with things no one could have forseen. After tragedy befalls his expedition, Hardy is charged with bringing the mummies he recovered (six in all, though one sarcophagus is twice as big as any normal human) back to LA. When his train is waylaid in the Arizona desert, he learns that his cargo may be more dangerous than he ever suspected, and that cursed mummies are only the tip of the iceberg.

This was a fun, entertaining, and wild ride. Told in the style of old weird fiction stories, Sidor brings quite a bit of HP Lovecraft and The Mummy to the table. The latter half of the book, which takes place in Arizona and Mexico is evocative of Weird West stories. There are monsters and mummies and cultists and vampires. There are cowboys and banditos and Pinkertons and train heists. There’s cannibalism and curses and ancient legends. This book is a mashup of everything that makes weird fiction fun.

In fact, my biggest complaint is that in including everything, the story loses focus in places and drifts along, detached. Sometimes the actions runs along at breakneck pace, and sometimes it stutters to a halt to gaze for a while at the supernatural scenery.

Still, anyone who is looking for a good time with some good, old-fashioned pulp will probably enjoy this book. I mean, just look at that epic cover art! If the cover sings to you, then more than likely the book will as well.

An advance copy of this book was provided by the publisher via NetGalley in exchange for an honest review.

A Treacherous Curse by Deanna Raybourn

This is the third book in the Veronica Speedwell series. Naturally there will be spoilers for the first two books in the review below. Don’t forget to check out my reviews of A Curious Beginning and A Perilous Undertaking.

After the adventures of the past two books, Veronica and Stoker have eased in to a unique sort of friendship. Kept busy cataloguing the vast (and strange) collections of the Earl of Rosemorran, who hopes to turn his family’s collection of oddities into a museum. When a cursed Egyptian expedition, complete with mysterious deaths and disappearances, makes the tabloids, irrepressible Veronica can’t resist getting involved, especially once it becomes clear that Stoker has a dark past with one of the curse’s victims. With scandal threatening to undo her friend, Veronica wades into the breach, determined to prove Stoker’s innocence.

Deana Rayboun continues her comedic-romantic-Victorian-mystery series in fine form. She provides plenty of ribald humor, sexual tension, and a juicy mystery. By this point in the series, we are well beyond the awkward introduction portion, and can simply sit back and enjoy watching the characters bounce off one another. In A Treacherous Curse, we get to see the relationship between Veronica and Stoker deepen and mature (possibly the wrong word choice here) as Stoker’s past comes back to threaten him in the present. Though I’ll confess that it took me a bit to warm up to her, Raybourn has quite a fun, strong character in Veronica Speedwell. Here is a woman who knows what she wants and society be damned.

Fans of the first two books will enjoy this continuation of the series. Anyone looking for an atypical Victorian mystery series should add this to their TBR.

An advance copy of this book was provided by the publisher in exchange for an honest review.

The Woman Who Would Be King: Hatshepsut’s Rise to Power in Ancient Egypt by Kara Cooney

To me, Hatshepsut has always been a fascinating woman. She defied all convention and was able to install herself as King in the highly regimented and conservative society of Ancient Egypt.

Hatshepsut, as the daughter of a Pharaoh, was groomed from birth to be royalty. But her fate was always to be a King’s wife (Egypt did not have queens), and never a ruler in her own right. With the death of her father and her two eldest brothers, Hatshepsut found herself married to her sickly younger brother (in Ancient Egypt, keeping things in the family was taken to horrifying extremes). When their union did not produce a male heir, it seemed as if her father’s dynasty might end after only two generations. Starting as regent to the new infant king (her nephew), Hatshepsut slowly consolidated power around herself, eventually declaring herself co-king, and taking the reins of the ancient world’s most prosperous kingdom.

Early historical research painted Hatshepsut as a conniving, grasping, and devious woman. More recent (and balanced) studies of the Pharoah paint a different picture. Rather than a manipulative Lady Macbeth, Hatshepsut was an intelligent, educated woman who was born with every desired trait necessary to rule Egypt, except of course, the correct genitalia. Cooney paints a vivid account of palace life in Ancient Egypt, and does her best to bring this remarkable woman to life despite the (purposefully) sparse information about her. Cooney has done a remarkable job with this book, using data where she can and inference where she cannot. She is always careful to state what is conjecture and what is not, but at the same time presents the reader with the evidence for her statements.

The Woman Who Would Be King is currently available for purchase.

The world we see and know is not reality in its entirety. There is another world, one that existed before ours, that spun alongside us, and one–having been relegated to hide in the shadows at the edges of our reality for the past 800 years–just itching to let loose and stretch its claws.

Meet Ben Garston. a nice, woe-begotten guy who is anything but ordinary. Ben, formerly Red Ben, has straddled the world we know and the hidden world for centuries. He is bound by the Pact, the inescapable Lore, the final solution to keep the monsters at bay, bound to remain alone and unchanging as the ages move by. Ben might look human, but he is anything but.

But there have always been those ill contented to abide by the rule of the Pact. One night, the walls of a museum hosting a display of ancient Egyptian artifacts are violently breeched. Chaos and magic run through the streets of New York, and the Pact has been shattered. Ben must find out why the Lore has been broken, and why those responsible seem to be targeting him. Time is of the essence, because in three days the chaos will swallow the world.

Chasing Embers is one of those books that’s hard to pin down. It is a fairy tale, a fantasy novel; after all, there’s dragons and knights and fairies and witches. Yet the setting, for all the magical accouterments, is solidly couched in the modern world: planes, trains, and automobiles. I would compare it to the Anita Blake or Merry Gentry series by Laurell K. Hamilton (though less raunchy). Or even The Hollows by Kim Harrison. Bennett does a good job of incorporating ancient legends and myths, along with magic, into a believable real world.

The main flaw with this book is that it is the first in the series. Bennett has built a complex world, and large parts of the book are given over to providing the reader with relevant backstory and rules of engagement. While certainly not a bad thing in itself, the story can drag on a bit as we enter into exposition mode. In all though, this is an interesting and unique story, and I look forward to seeing how it will carry forward in future books.

An advance ebook was provided by the publisher via Net Galley in exchange for an honest review. Chasing Embers will be available on September 6th, 2016.