The Revolutionary War is the origin story of the United States. Like every origin story, it carries certain expectations: a plucky underdog comes into power, or comes into the realization of their own inner power, and proceeds to upend the established order of things. The origin story reaches its climax when said plucky underdog is able to defeat the villain, who is the representative of the power of the old order.

That is certainly the popular narrative that winds through most histories of the Revolutionary War. But is this all there is? Hoock’s Scars of Independence seeks to add to the Revolutionary narrative, to complicate and humanize the feel-good legend most of us learn in school. Hoock has little time for the “immaculate conception” origin of the United States, which features a noble and forward-looking young colony rebelling and separating nearly bloodlessly from the stodgy and declining Britain. Rather, Hoock shows us the bloody underside of the fight for independence, a violent and cruel conflict regarded in its time not as a fight for independence, but as a civil war.

In Scars of Independence, Hoock takes us through the escalating violence on both sides of the conflict. We learn about tarring and feathering, prison ships, rapes, whippings, hangings and lynchings. We learn about petty grievances between neighbors turned into war crimes. About prison camps in mines, about the impossible position of Native Americans and of slaves, caught between two feuding (largely white) armies.

This is a fantastic, thoroughly researched history. A must read for any history buffs or Revolutionary War enthusiasts. Hoock has presented an aspect of the Revolutionary War that is seldom dealt with in popular literature. Though this is first and foremost a history book, Hoock’s writing style is accessible and clear, and Scars of Independence is highly readable, even for the more casual reader.

A copy of this book was provided by the publisher via Goodreads Giveaways in exchange for an honest review. 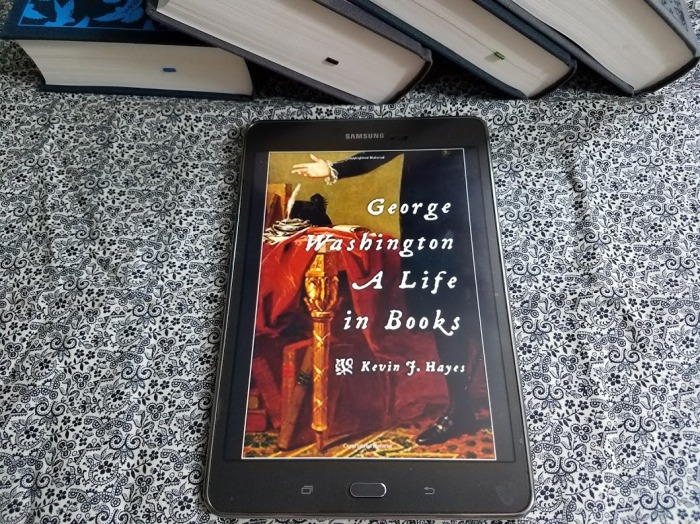 George Washington: A Life in Books by Kevin J. Hayes

So here you are, reading a book review about a book about the history of George Washington’s books. It’s hard to get more meta than that. In all seriousness, though, this was an interesting angle for a history/biography about the first president of the United States.

Working roughly in chronological order, Hayes takes us through the library at Mount Vernon. We start with Washington’s earliest books (collections of devotions by famous preachers), and move from there to travel guides, reference books, abolitionist tracts (though he regrettably never used his considerable political influence to address the injustice of slavery, in his personal dealings Washington was an abolitionist), popular fiction, and military books.

Hayes introduces us to a man born in the American colonies, and denied a “proper” English education. In order to compensate for an education he perceived as lacking, Washington would embark on a lifetime quest of self-improvement. He actively sought out books to deepen his understanding of the physical, spiritual, and literary worlds. His passion for books and for reading would remain undiminished throughout his life.

George Washington has deservedly been the subject of countless biographies. Approaching his life from the direction of his library is both refreshing and educational. While some of the conclusions the author draws based on the content of the Mount Vernon library shelves seems a bit reaching, on the whole this is a fascinating look at one of the Founding Fathers of the United States.

Independence: The Struggle to Set America Free by John Ferling

This sweeping history focuses not on America’s War for Independence, but on the decade or so before independence was declared. With the French and Indian War over by 1763, Great Britain found itself with a massive war debt, accumulated for the protection of its colonies in America. In order to raise revenue, the British ministry decided to levy a series of taxes on its colonies, perhaps the most infamous of these being The Stamp Act of 1765.

The taxes were wildly unpopular with the American colonists, not least because they had no representation in the British ministry. Protests to the Stamp Act and other taxes enacted by Parliment were met with fierce resistance. Mobs gathered in city streets, leading colonists took to pen and paper, writing tracts decrying the British government for denying their right as British citizens to determine their own destiny.

From these first days in 1765, when for many the main goal of their protest was reconciliation with the motherland, until the hot days of early July, 1776, when independence seemed like an inevitability, Ferling leads us along the path the Founding Fathers took towards declaring the United States its own country. He takes us through the debates in the British Parliment and the arguments between the members of the Continental Congress. The bloody battles and confrontations between the Redcoats and the Continental Army and the political wrangling of the nascent government in Philadelphia, Pennsylvania.

This is a well-written, thoroughly researched book. My only caveat is this: this is a history book. This is not a novel. You will learn a great deal from this book, and Ferling does try to leaven his writing with humor on occasion, but this is first and foremost a history book. Ferling’s goal is to tell us as much as he can, as accurately as he can, and a fair amount of dryness is the inevitable result. I recommend this book to any history buff (Revolutionary or otherwise), or anyone who wants to learn about the path the United States took towards becoming independent.